Valentine’s day will be quickly approaching, and what better accessory to hold by your side than a Whiting & Davis purse?

Whiting & Davis is considered one of the oldest handbag companies in the US, with the company having been around since 1876. William Wade, Edward Davis, and Louis Heckman founded the company. They had originally set the bar high with their glamorous style of handbags. In 1892, the first mesh bag was created. All the rings of metal were formed and joined by hand. Soon enough, in 1912, a machine was invented to automate the mesh-making process. A man by the name of Charles Whiting then partnered with the company and raised money to purchase and rename it to “The Whiting & Davis Company”. Whiting & Davis blossomed into a well-known and well-loved brand. By the 1920s, their purses were frequently hand-in-hand with the style of the flappers. They began to steer away from silver color, and shifted to more vibrant colors. By the 1930s, they began to collaborate with iconic designers. With an increase in popularity and success, Whiting & Davis took pride in developing their infamous slogan, “going hand in hand with fashion”.

Whiting & Davis continues to keep their standards high, even through the continual changes of fashion. They now focus on jewelry and other accessories, as well as the handbags. Their original mesh metal handbags now come in many different shapes, colors, and styles.

Pictured above and below is a gold mesh Whiting & Davis clutch featured in our store. With the multiple compartments, gold coloring, and immense detail, this purse represents Whiting & Davis quite well. 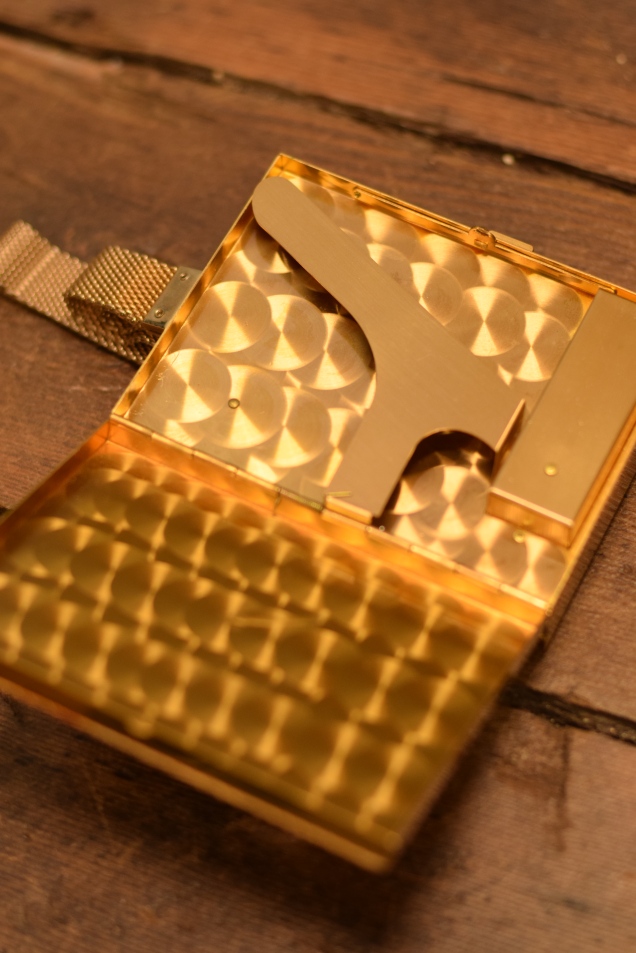 Whiting & Davis has always had an eye towards trend and functionality. Be sure to stop by our store today to check out one of their rare and beautiful pieces!